“Weather girl.” When you Google those words, you’ll find countless images of pretty girls in low-cut necklines and short, tight dresses with perfectly curled hair and pristine lipstick. It’s the epitome of gender stereotypes that women across the country, even in Charlotte, are trying to break.

Most all broadcast meteorologists you see on TV have at least a Bachelor of Science in Atmospheric Science, often with minors in climate, communication or even math and physics. Meteorology is the science of all things changing in our atmosphere—temperature, pressure, wind speed, humidity—and those changes also happen with changes in height, distance and time.

All this means A LOT of math. Multiple semesters of calculus, physics, and chemistry are required in meteorology majors, since atmospheric science is a physical (of physics principles) science.

So, ask any “weather girl” you see on TV and she’ll likely correct you. “I’m a broadcast meteorologist.” We don’t say weather boy, or law girl or doctor girl…so why is this any different?

Tara Lane, Queen City News/ FOX Charlotte Chief Meteorologist, has been on television in Charlotte for two decades, often the only woman on her team: “They might be older… more experienced… but then you say to yourself—we’re all analyzing the same data, we’re passionate about the same thing—weather. And you know what? You are different from them; you bring your own unique style to the table.”

According to the U.S. Department of Labor, women make up half of the workforce but only 28% of STEM careers. Only 15% of those women are engineers and 26% in computer science. Social scientists have found the most gain for women, increasing by 44% since 1970.

Overall, women in science ARE making gains, becoming more seen and more represented. Only 7% of women were included in STEM careers in 1970, increasing by 20% over the last few decades.

Female broadcast meteorologists push to be visible scientists to young girls. For seven years in a row now, these women wear purple on Pi Day to help jump start a conversation about women in STEM.

According to the American Meteorological Society, women make up 29% of all broadcast meteorologist positions; and only 8% are in the management position of chief meteorologist.

Nicole Madden, Chief Meteorologist at WCCB says confidence and connections are key when taking on that management role: “Even with all the support I had growing up, I still at times struggle with feeling like I need to put in extra effort to prove I deserve to be in the position I am in. I’ve recognized that often it stems from unconscious gender biases. I’ve learned it’s important to take a step back and try to not let it affect me personally.”

Carving a Path for Women Meteorologists

June Bacon-Bercey is credited as the first Black female meteorologist to hit the airwaves. At her time at UCLA in the 1950s, she was told not to pursue a career in science, but to study home economics instead.

After serving as a meteorologist for the National Weather Service, Bacon-Bercey went on to become the first woman degreed in meteorology and on TV in 1970. After just four months, she became the chief meteorologist at that TV station in Buffalo, New York.

Bacon-Bercey carved out a path for women in meteorology, a community that has so become tight-knit that meteorologists mail Secret Santa gifts across the country every year.

Katie Walls, former Charlotte Spectrum Meteorologist, says it’s important for women to raise each other up: “Help your fellow female. Never burn a bridge. The more supportive we are of each other, the stronger we become.” 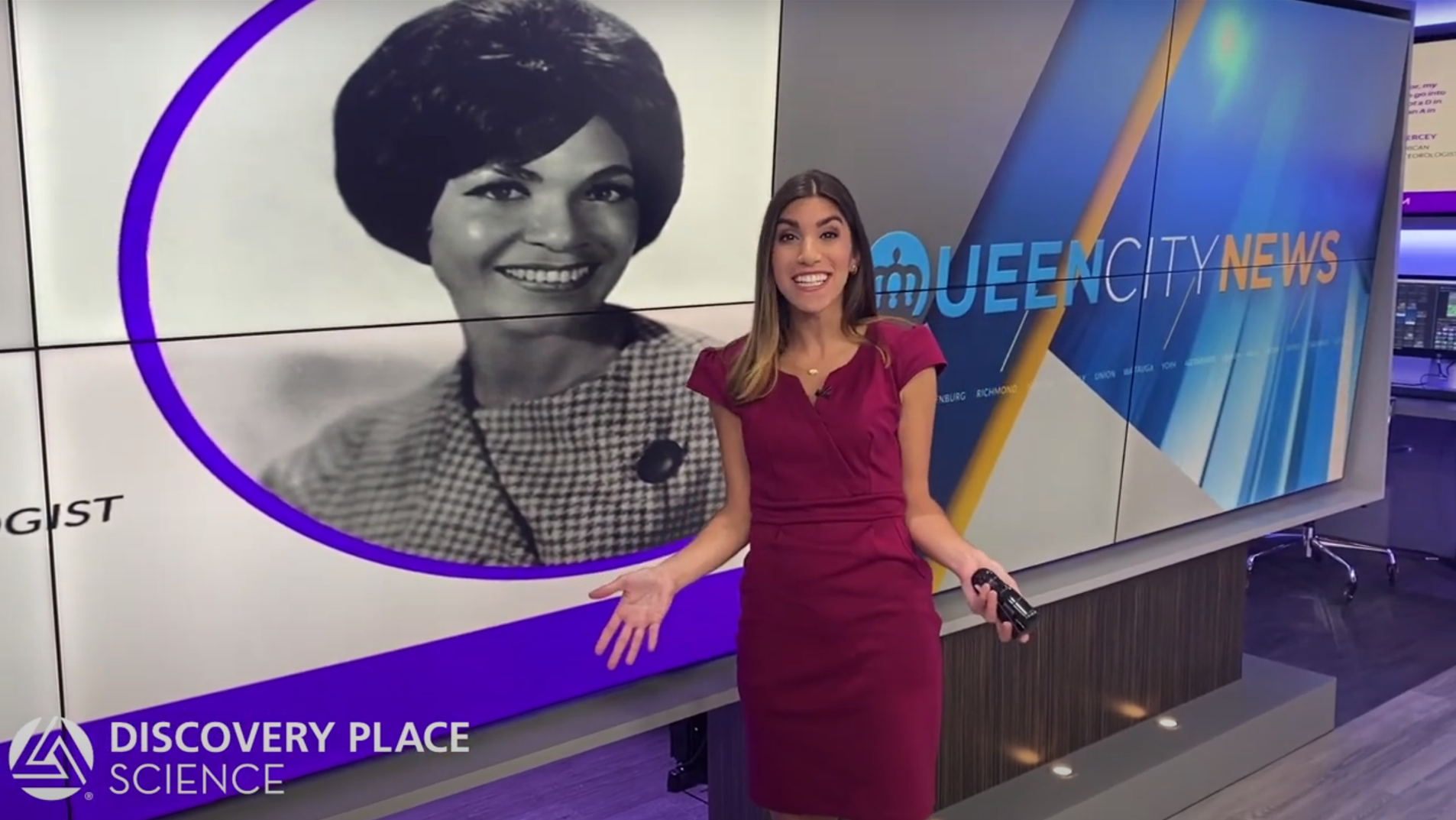 Below, women in broadcast meteorology in Charlotte share insight and advice to young girls interested in science. Here is their perspective:

“Probably one of the biggest challenges is being a working mom in my particular field as a broadcast meteorologist. As we all know, weather doesn’t stop, and most of the time you’re required to be there to cover the big weather events. This could mean something like-- missing out on playing in the snow with your kids because you’re at work keeping people informed. The hours can be difficult as well, whether it’s getting up for work in the middle of the night or working in the evenings until midnight… sometimes later! What I tell myself is that we’re all doing the best job we can as a parent, and what matters is the quality of the time you spend with your kids. Also—we hope we’re setting a good example for them by doing a job that we’re passionate about!

At many TV stations, the weather team consists of at least a couple men and one woman (although I see that changing more and more lately, with two or more women on the weather team, mine included!). But that’s how it was for me for many, many years—I was the only woman, which can be a little intimidating when you’re starting out. They might be older… more experienced… but then you say to yourself—we’re all analyzing the same data, we’re passionate about the same thing- weather. And you know what? You are different from them; you bring your own unique style to the table. You know that you’re walking in and doing the best job you can do each day. Easier said than done, right? That being said, feedback and constructive criticism are important; always be open to listening to and learning from supervisors and co-workers.”

“Men have typically dominated careers in STEM, but it is slowly changing as more women find their place in these amazing fields. For me, STEM means possibility and discovery. It is an ever-changing field that works to improve what is now and helps to provide a better future. This discovery and adventure doesn’t have to be geared towards just men, we as women can forge our own paths and create something better for future generations. I have three daughters of my own and every day I encourage them to get involved in STEM.

I love seeing how excited my girls get when they learn something new in science or technology at school. We can then discuss how that information can be taken from an idea, put into a plan and possibly make an impact. My advice to everyone and especially girls is ‘find what you love and turn it into a career, because then you will be passionate about making a difference.’”

“Science has always been my passion and I’m so grateful to have mentors that continue to push me forward. As a meteorologist and climate communicator, I have run into my fair share of doubters, social media trolls…just because I’m a woman. But I can’t and won’t let that stop me. I use those lemons to make more lemonade. Prove them wrong; work your way to the top. There are so many glass ceilings we still have to break, but every step we take is climbing another step on that ladder. Don’t get discouraged. There are so many people, both men and women, already in your corner!”

“I’m not the only female broadcast meteorologist in Charlotte, but I am the only one at my station, WCNC Charlotte. Thankfully, my team is fantastic and I have never been treated differently. However, I have had my challenges in these roles alone having been on television since 2016. I don’t have exact numbers, but it seems like we are more likely to be targeted by mean or rude comments as well as inappropriate pictures, comments and messages. It comes with the territory, but that doesn’t make it right.

An old mentor of mine, and I use the term mentor loosely, told me I would never make it in this business. I would never graduate with a degree in meteorology, never obtain a television job. Every day I prove this person wrong and also prove to myself that my hard work has been rewarded. I think if I had any advice for a young woman wanting to pursue a degree in a STEM field, it would be that regardless of your circumstances, it’s important to stay true to yourself.

It’s also okay to remember that you don’t have to be the first or even be the best. Trying your hardest is good enough. But hard work truly does pay off, and as cliché as it sounds, nothing worth having comes easily. Careers that interest you and challenge you are cooler than you think at a young age. Being smart is hard, being smart is intimidating, but taking the easier way out will just bore you in the long run!”

“If you are interested in science, technology, engineering and/or mathematics, first of all, that's so exciting! There is SO much to learn about this world and you'll get to be a part of helping us all get to know it a little bit better.

In these fields of study, I know it can be so easy to compare yourself to others and fear what they may be thinking about you (based on stereotypes, circumstances or otherwise). There will also be days when you're discouraged, make a mistake, or don't understand something. My advice would be to take it day by day, working hard to learn from frustrating moments and finding support from mentors in the field who encourage you and push you to be the best you can be. Give yourself and those around you lots of grace and have so much fun nerding out over what makes you happy!”

“I feel lucky. My parents, teachers, professors and classmates have always been so supportive of me having an interest in a STEM field. I was challenged to do my best. Even with all the support I had growing up, I still at times struggle with feeling like I need to put in extra effort to prove I deserve to be in the position I am in. I’ve recognized that often it stems from unconscious gender biases. I’ve learned it’s important to take a step back and try to not let it affect me personally.

Even if you get brushed to the side or feel unheard, it’s important to not make an experience define your potential in STEM or any career for that matter. Women not only bring a new perspective to the table, but we problem solve in a different way than men. It’s so important to recognize and support other women who are putting themselves out there. Confidence and connections are key.”

“While I do think women’s acceptance in the STEM field is growing, there are still challenges that women tend to encounter more than men. One challenge many female meteorologists have encountered is people having unsolicited opinions about appearance. Making a conscious effort to differentiate distasteful comments from constructive criticism can help you improve both personally and professionally.”

“While the industry is adding women, we are still few and far between. It’s more important now than ever to raise each other up. Be kind to one another. Help your fellow female. Never burn a bridge. The more supportive we are of each other, the stronger we become.”

“When I think of a challenge I faced as a female scientist, I think about a previous colleague who early on made me feel less important in group settings by predominantly making eye contact and addressing the male members of the team instead of me. I overcame this challenge by intentionally speaking up during meetings, having the confidence to voice my opinions and ideas, and over time, letting my work speak for itself.”