More Than The Mona Lisa 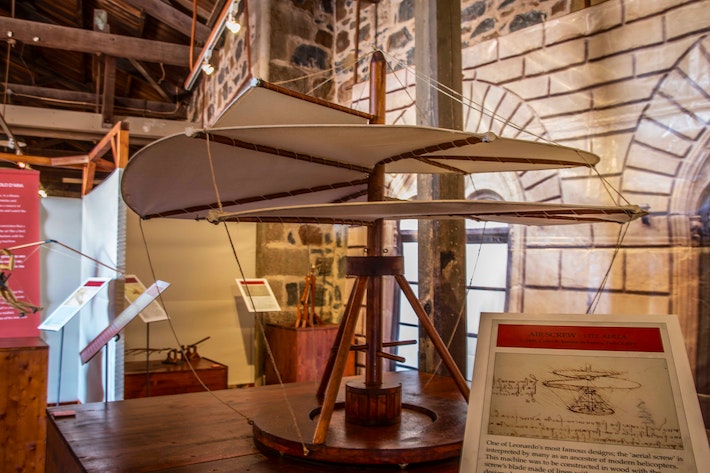 Presented by Duke Energy, Da Vinci’s Machines connects Leonardo da Vinci’s studies in mechanics, flight, robotics, nature and anatomy, and demonstrates how his work is more relevant in today’s scientific world compared to 500 years ago when he first conceived his amazing ideas.

Featuring over 75 exhibits, many of which are interactive reconstructed models of his creations, the exhibition includes some of the latest discoveries of lost Leonardo inventions, such as da Vinci’s mechanical drumming robot, along with his most iconic designs and artwork reproductions. All of the featured exhibits were handcrafted by the acclaimed Artisans of Florence in collaboration with The Niccolai Group.

They were created based on da Vinci’s drawings and blueprints from his famed Codices, using only tools and materials that were available during the 15th century. Today, the Da Vinci Codices are treasured manuscripts and are featured in many world-renowned museums and library collections, with some even owned by the Queen of England, the King of Sweden and Bill Gates.

“Our company would not be what it is today without the amazing engineers, like Da Vinci, who constantly dream up innovative ways to harness power for our communities,” said Cari Boyce, president of the Duke Energy Foundation. “We are pleased to help bring Da Vinci’s Machines to Discovery Place Science and inspire the emerging generation of engineers to invent the next great wonder.”

While exploring the exhibition, guests will also have the opportunity to meet some famous characters from da Vinci's life through dramatic interpretation. Guests may encounter Leonardo da Vinci himself; his professional rival Michelangelo; the Holy Roman Empress Bianca Sforza, who is also the subject of the disputed da Vinci drawing La Bella Principessa; Pope Leo the 10th who admired da Vinci’s architectural designs; and Alessandro de Medici, the duke of Florence from 1531-1537. Their interactions will bring the inventor’s story to life, giving guests the opportunity to ask questions and interact with history.

Da Vinci's Machines is part of the Year of the Engineer, and will be on exhibition Saturday, November 4, 2017 – Sunday, May 6, 2018. Entry to the exhibition is free with Museum admission. Admission to Discovery Place Science is $17 for adults (14-59); $13 for children (2-13); $15 for seniors (60+); and free for Discovery Place Science Members and children younger than 2, plus tax. Discounts are available for groups of 15 or more. Children age 13 and younger must be accompanied by an adult while in the Museum. Guests can purchase tickets online at science.discoveryplace.org, via phone at 704.372.6261 x300 or in person.

One of the top hands-on science museums in the nation, Discovery Place Science provides ever-changing, entertaining facilities that engage people in the active exploration of science, technology and nature. The Museum brings relevant, contemporary science to life through groundbreaking exhibitions, interactive educational programming and hands-on activities.

Discovery Place Science is located in uptown Charlotte at 301 N. Tryon Street. Convenient parking is available in the Museum’s parking deck – the Carol Grotnes Belk Complex – at the corner of Sixth and Church Streets. For more information about Discovery Place, call 704.372.6261, visit discoveryplace.org or connect with Discovery Place Science on Facebook, Twitter, Instagram and YouTube.

The Duke Energy Foundation provides philanthropic support to address the needs of the communities where its customers live and work. The foundation provides more than $30 million annually in charitable gifts. The foundation’s education focus spans kindergarten to career, particularly science, technology, engineering and math (STEM), early childhood literacy and workforce development. It also supports the environment and community impact initiatives, including arts and culture.

Duke Energy employees and retirees actively contribute to their communities as volunteers and leaders at a wide variety of nonprofit organizations. Duke Energy is committed to building on its legacy of community service. For more information, visit http://www.duke-energy.com/foundation.

Duke Energy is a Fortune 125 company traded on the New York Stock Exchange under the symbol DUK. More information about the company is available at duke-energy.com.

Stay up to date with what's happening at Discovery Place in the Press Room.