Inspiring wonder for more than 70 years

We bring science, nature and design together to create transformative experiences that enable our community to understand, enjoy and apply science to their lives.

Discovery Place is shaping a future where people embrace science to create opportunities, build hope, solve problems and bring positive change for our world. Since our founding in 1946 as the first science education center in the Southeast, Discovery Place's importance to our field and community continues to grow. We now fulfill our mission through three distinct Museum experiences, delivery of education, outreach and virtual programs and hands-on professional development training for pre K-12 teachers throughout the region. 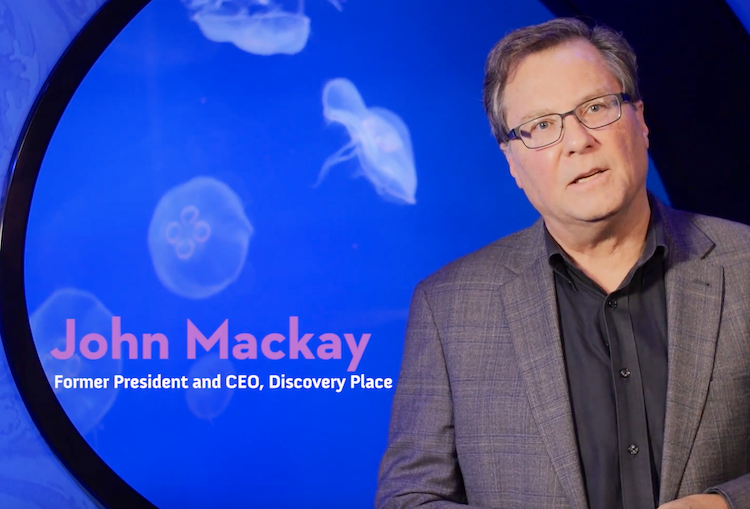 The story begins in 1946 with a school teacher named Laura Owens.

Friends, colleagues, parents and community members had been bringing her objects, live animals and specimens from the natural world, and she decided that her students needed a hands-on environment in which to observe and learn about these things. With help from the community, she opened a small museum on Cecil Street in Charlotte.

Ms .Owens’ small experiment was so well-received that soon the community, led by the Junior League of Charlotte and the Lions Club, worked with Mecklenburg County to develop a new Children’s Nature Center. The building was situated on property adjacent to the new Freedom Park, which allowed for access to the outside and the wonders of the natural world.

When the new Museum opened in 1951, it was one of the first facilities in the Southeast focused on bringing families and nature together. Its new hands-on approach to science and nature education was embraced by the community, and in 1965, the Museum opened a planetarium to begin educating students about the skies above. Students traveled from all over the state to learn about the night sky.

By the 1970s, Charlotte Nature Museum had grown into one of the most popular attractions in town, and its leaders were intent on expanding its reach and scope. Interest in science education was growing, spurred on by a post-Sputnick Soviet Union. The community responded to the demand for quality science education by approving funding and plans for a comprehensive hands-on science and technology center. Seeking to provide access for a growing Charlotte and to encourage uptown development, leaders decided to locate the new Museum on North Tryon Street.

In1981, a new museum known as Discovery Place opened its doors at 301 North Tryon Street with 72,000 square feet of space.

As the needs of the community grew, the facility expanded. In 1986, exhibition space was added to accommodate traveling exhibitions and in 1991 The Charlotte Observer IMAX® Dome Theatre opened as the first giant-screen motion picture theatre in the Carolinas. The Carol Grotnes Belk Education and Parking Complex was completed in 1996. In 2010, Discovery Place was completely transformed, with an 18-month, $31.6 million renovation, resulting in a re-imagined Museum with all-new interactive exhibitions and state-of-the-art labs that allowed the public to engage in real-world science problem solving.

As the learning needs of the Charlotte region continued to expand, Discovery Place made a commitment to training the region’s educators to be inspired and inspiring teachers of STEM education. In 2014, Discovery Place Education Studio opened on the Museum’s uptown campus. The program is dedicated to educator professional development with a goal of advancing student and teacher attitudes and achievements in STEM. The Education Studio facility was provided through a generous gift from Bank of America.